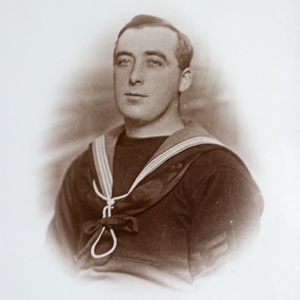 Frederick was born in Cleatham, Lincolnshire on 23rd February 1890. His father, George, became a farm bailiff and moved his family to Kirton in Lindsey, then Maidwell in Northamptonshire, finally settling in Holwell around the time of the Great War. His mother, Mary, had 3 more sons and 5 daughters.

Frederick joined the Royal Navy in 1908 and served in a range of ships and shore-based stations. He saw action in the War aboard HMS Kent, a Monmouth Class Cruiser. He fought in the Battle of the Falkland Islands in 1914 and at Jutland in 1916.

His Navy records him as a 5’4” tall, with light brown hair, blue eyes, a fresh complexion and a chest measurement of 35”.

Frederick was discharged from the Navy in 1919 and settled in Holwell, where he became the postman. He lived on Main Street, with his wife Lily James who he married in about 1911, in what is now still the village Post Office. He died in 1972.

Two of his grandsons still live in Holwell. Simon Dixon lives at Glebe Farm on Holwell Lane and Richard Dixon lives in the Post Office on Main Street.

Frederick Dixon and his family